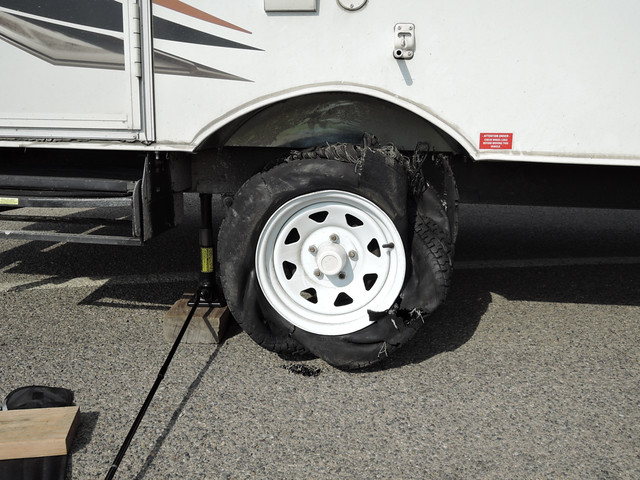 How does a trailer with 2 wheels get 3 flat tires?  Yes, when the spare also blows.  This happened in the space of a week.  All three tires were, we believe, the original ones on the trailer, and none of them looked worn out.  Worn, of course, but not about to blow!

All three times it was on the highway, at full but not excessive speed (probably about 60 mph), once with Corndog driving and twice with Blisscat.  So far, it seems to not be that difficult to maintain control with a flat on a trailer.  I’m guessing it’s because there are three axles keeping the whole setup stable.  We were able to put our hazards on and move over to the shoulder pretty easily all 3 times.  We are very fortunate.

The tires were all Freestar brand.  I wonder if they’re any good?  I keep wondering if they had a certain lifespan and they all give out afterwards, except that one, the spare, was still unused.  It doesn’t make sense.

We have noticed that groups of upper-middle-aged friends bring their big RVs and hold rendezvous at RV parks.
We also notice that these people tend to set their chairs in a circle, drink wine, and:

pronouncedly and to an inordinate degree. It’s quite predictable.

We took a hike over the July 4th weekend to Sol Duc Falls, a beautiful hike in itself, and then we got to see this:

This is out of control

I have to show you all this.

This RV park was just a quick pick from the internet — we needed to reserve some place for a weekend.

Glad we did. Just look at this place. Beauty is on the rampage out here. 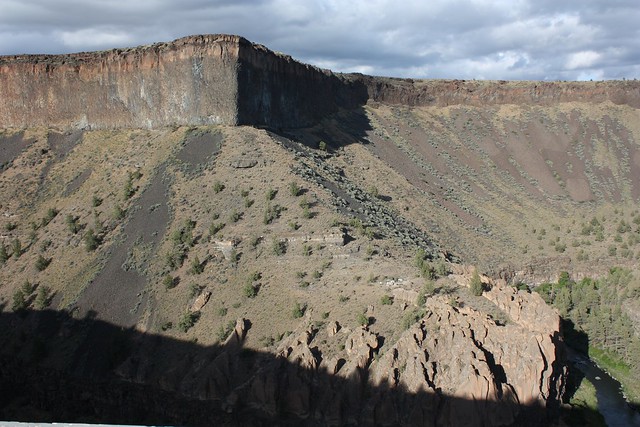 It is Crooked River Ranch, a big subdivision in the country outside of Terrebone, Oregon. The river canyon is a few dozen yards north of the RV park area. 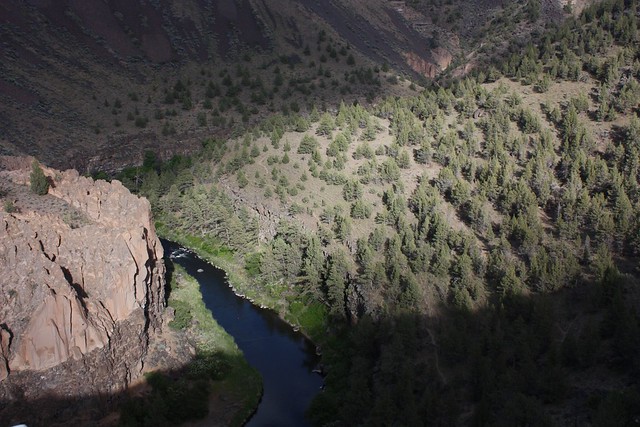 You can hear the river rapids from up on the rim.

I can’t stand it.

Poor Excuse For A Retiree

Corndog has been retired almost a year, and only just now has he acquired a fishing pole.

Get with the program, Mr. C!

Animals On The Road (Bison Video!)

We’ve been in Yellowstone the last few days and have so many photos–Corndog said to post them by “flora and fauna”, so to speak. First up, some bison footage, with baby bison.

Then, each parking lot has a raven posted.  This one was after a juice box:

We left Taos, NM at the end of April and started our way North.  Right now we’re in Moab, UT, where the rocks are redder than I’ve ever seen.  It’s amazing landscape, and it’s no wonder there are so many people here.  We’re on our way to Bryce Canyon NP, then Capitol Reef, then Salt Lake City for a week’s research at the Family History Center.  And shopping.

Off the road, enjoying a place and time

Two months and more since our last post — well, here we are, and here is a little of what we’ve been up to.  As you may know, BlissCat and CornDog have been holed up for the winter between Santa Fe and Taos, New Mexico, in a rented house. It is an ancient place.

Built to last: A bit crooked now,  but to be expected after 350 years!

The Spanish newcomers themselves found it to be an ancient site. Clearly, people had been living here at least 1,000 years before the Spaniards arrived in 1598.

The light here is always gorgeous. The sky is always interesting, and usually hard not to stare at.

It is an interesting cloud near the juncture of the mountains and the Great Plains just beyond.

Light pours into the house every afternoon.

The geranium enjoys the sun and sky.

It is a great place to sit and enjoy the time.

It is a great place and time to enjoy an IPA.

A little jaunt in the country

For Corndog’s birthday, we headed out for a nice drive and lunch in the country between here (Alcalde, New Mexico – near Espanola) and Taos. We headed up Highway 68, and at the town of Pilar, we turned off to go up Highway 570 into Bureau of Land Management (BLM) land along the Rio Grande, where the river just comes out of the deep gorge.

The gorge is not so deep here as it is farther north, but it is still impressive. There were some fishermen out along the banks; a local said the fishing is getting good now, in December.

Then we saw some frickin’ graffiti.

We kept on up the road, which climbed upward away from the bottom of the gorge. The view started to open up.

The stream in the canyon farther back, Rio Pueblo de Taos, is the one which flows through the Pueblo itself, and supplies their water. This confluence at the Rio Grande (which is out of view at the bottom of the picture) is well below the Pueblo, of course.

And it opened up more.

The Rocky Mountains behind Taos are just visible above the gorge rim.

We got a glimpse of the Rio Grande, now far below.

The Rio Grande, just above its confluence with Rio de Taos Pueblo

The drop-offs were sort of scary in places. Bliss Cat did not want to take chances, so she drove, and she did not look around.

Bliss Cat refuses to be distracted. It is a lo-o-ng way down.

A couple more switchback turns to go – top of the gorge in sight.

We’re looking west from the rim of the Rio Grande gorge.

Looking back, you almost don’t see the gorge at all.

To hell with Waldo — where did the Rio Grande Gorge go?

The easy way to cross the Rio Grande Gorge.

We were cruising along and enjoying the scenery, when we saw a traffic jam up ahead. What?!!  Now, this was before one of us had any beers for lunch.

OH! Just icing on the birthday cake, I see.

A bighorn sheep by the highway.

The big dog in the small car ahead of us barked at the sheep, and it prudently moved off. Corndog was concerned that it might get hung up in the wire fence, but it sailed over the fence pretty handily.

Bighorn ram making his getaway. Those are his peeps in the background there.

It was quite a good day trip!